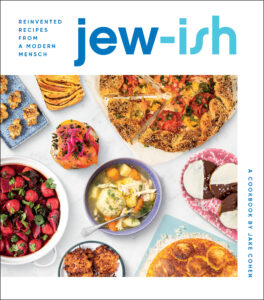 In Conversation with Pati Jinich

When you think of Jewish food, a few classics probably come to mind: chicken soup with matzah balls, challah, maybe a babka. But as food writer and self-described “nice Jewish boy” Jake Cohen demonstrates in his debut cookbook, Jew-ish: Reinvented Recipes from a Modern Mensch, Jewish food is so much more.

In Jew-ish, Cohen reinvents the food of his Ashkenazi heritage and draws inspiration from his husband’s Persian-Iraqi traditions to offer fresh takes for a whole new generation of eaters. Imagine the components of an everything bagel wrapped into a flaky galette and latkes dyed yellow with saffron for a Persian spin on the potato pancake. The cookbook features elevated, yet approachable classics like roasted tomato brisket and Iraqi beet kubbeh soup, plus innovative creations like cacio e pepe rugelach and matzah tiramisu.

More than a collection of delicious recipes, Jew-ish is also a guidebook to building community. As Jake reconciles ancient traditions with modern times, his recipes become a love story of blending cultures and an invitation to gather around the table and create new memories with family and friends.

A bright new star in the food world, Cohen was a food staffer at Saveur, then food editor of Tasting Table and Time Out New York, and most recently the editorial and test kitchen director of social media juggernaut the FeedFeed.

He will be in conversation with Pati Jinich, a Mexican chef, author, and host of PBS’s three-time James Beard award-winning and Emmy nominated series, Pati’s Mexican Table. During the event, Cohen will demo how to cook one of the recipes in Jew-ish.

Thanks to OneTable for being our promotional partner.