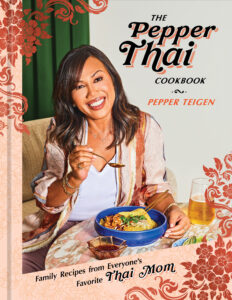 In Conversation with Priya Krishna

This event, originally scheduled for Monday, April 19th, will now be held on Thursday, May 13th. All tickets purchased for the April 19th date will be honored on May 13th. With questions, please contact [email protected].

Originally from the small town of Isaan in Thailand, Pepper Teigen has become America’s favorite Thai mom and Yai (grandma). Her passion for food goes back to her first job cooking and selling coconut pancakes to commuters each day before school. When Pepper got married and moved to America to help her husband operate a bar that he owned, she would cook food with Thai flavors for the customers. She became an expert at improvising with American ingredients when Thai ones, like green papaya and Thai basil, were hard to find. She not only kept her love of Thai food and traditions alive in the small towns where she lived in Idaho, Utah and Washington, but she also used food to introduce her daughters, Chrissy and Tina, to her Thai culture.

In her debut cookbook, The Pepper Thai Cookbook: Family Recipes From Everyone’s Favorite Thai Mom, Pepper offers 80 stir-fried, saucy, sweet and tangy Thai-style recipes including fried chicken larb, pad Thai brussels sprouts, lemongrass chicken, and scalloped potatoes. She also shares stories from her life, from the early days of adjusting to living in the U.S. to what it’s like to live with America’s favorite food family. Pepper will be in conversation with Priya Krishna, a food reporter at The New York Times and bestselling author of the cookbook Indian-ish.