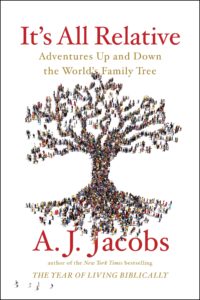 It’s All Relative: Adventures Up and Down the World’s Family Tree is a book about A.J. Jacobs’s family. And also your family, because it’s the same family. So, as a (distant) cousin of his, you might want to check this book out.

Jacobs, an experimental journalist, chronicles his adventure in helping to build the World Family Tree—a quest to unite the entire human race in one all-encompassing family tree. (Think six-degrees of Kevin Bacon, but we’re all Kevin Bacon.) It’s a historic project involving thousands of researchers and scientists, and it’s revolutionizing the way we think about race, ethnicity, history and the human species.

In It’s All Relative, Jacobs attempts to convene the biggest family reunion in world history. He unearths his own genealogical connections to Hollywood actors, Civil War soldiers, and real-life scoundrels. He investigates new types of families, from sperm donor siblings to group marriages. Jacobs examines the legitimacy of DNA tests that purport to reveal your ancestry. He meets thousands of cousins, from all seven continents. He has a beer with President George H. W. Bush and figures out his relationship to him (he’s Jacobs’s second cousin’s husband’s eighth cousin three times removed).

In this era of tribalism and us-versus-them thinking, It’s All Relative is a profound exploration of what binds us all. In the words of Sister Sledge—who actually show up at Jacobs’s worldwide reunion—we are family.

Jacobs is the bestselling author of The Year of Living Biblically, The Know-It-All, and Drop Dead Healthy. He is a contributor to Esquire and NPR, and the host of the podcast “Twice Removed.” Book signing to follow.