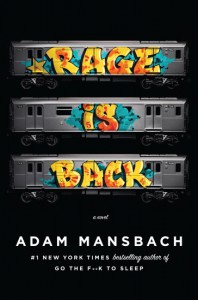 The author of the #1 New York Times bestseller Go the F**k to Sleep returns with a fearless new novel, Rage is Back, about a too-wise kid and the father who left him, the price of revenge and the greatest graffiti stunt New York City has ever seen.

The narrator of Rage is Back is Kilroy Dondi Vance, an 18-year old Brooklynite who deals pot and goes to prep school on scholarship, all while growing up in the shadow of his absentee father Billy Rage, a legendary graffiti writer who disappeared from New York City in 1989 following a feud with MTA police chief Anastacio Bracken. Now it’s 2005; Bracken is running for mayor, and Rage has returned to the city to settle the score, prompting a reunion of every graffiti writer who mattered in the 1980s.

Mansbach is also the author of the California Book Award-winning novel The End of the Jews, and the cult classic Angry Black White Boy.