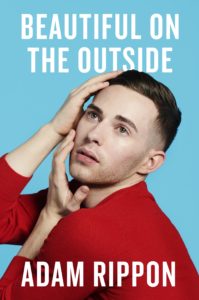 In Conversation with Liz Dolan

This program does not include a book signing. All books will be pre-signed by the author. Instead, ticket holders can have their picture taken with the author following the talk.


Your mom probably told you it’s what’s on the inside that counts. Well, then she was never a competitive figure skater. Olympic medalist Adam Rippon has been making it pretty for the judges even when, just below the surface, everything was a mess. From traveling great distances to practices to being so poor that he depended on the free apples at his gym for sustenance, Rippon got through the toughest of times with a smile on his face, a glint in his eye, and a quip ready for anyone listening.

Hilarious and inspirational, Beautiful on the Outside recounts Rippon’s journey from a homeschooled kid in Scranton, Pennsylvania, to coming out as gay in 2015, to winning a bronze medal as part of the figure skating team event at the 2018 Winter Olympics in Pyeongchang, South Korea—and all the disasters and self-delusions it took to get there.

In conversation with Liz Dolan, co-host of the long-running award-winning podcast “Satellite Sisters” and the workplace advice podcast “Safe For Work.” Dolan is the former Chief Marketing Officer at Nike, OWN: The Oprah Winfrey Network, Fox Sports, and National Geographic Channel. She’s the co-author of Satellite Sisters Uncommon Senses and You’re The Best: A Celebration of Friendship.