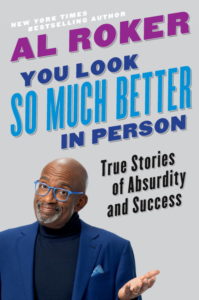 In Conversation with Eun Yang

The road to success can feel consumed by scheduling, networking, and nonstop hustle, not to mention self-doubt, setbacks, and disappointments. Al Roker—beloved co-anchor of NBC’s “TODAY” and weatherperson extraordinaire—understands this all too well. For the first time, he’s pulling back the curtain on his 40-year career at NBC to share the lessons and tricks he’s learned for living a happy life and achieving success through the power of saying “yes!”

In You Look So Much Better in Person: True Stories of Absurdity and Success, Roker teaches us how we can weather the storm of life, no matter how torrential the downpour. From his college days as a polyester-suit clad weather forecaster to battling the “Butter Man” during the Macy’s Thanksgiving Day Parade, his long career hasn’t always been an easy journey. Even Al Roker has been yelled at by his boss, suffered an emotional breakdown at work, and told he’d be better suited in another position.

Through a shrewd look at his career in the spotlight, the Emmy-award winning journalist shares sixteen “Al-truisms” to help put you on the path to success, including lessons learned from his mentor, news anchor Willard Scott, and his father, an MTA worker.

Roker, who recently starred in Broadway’s Waitress, is also a host on SiriusXM’s Off the Rails, an award-winning television producer, and CEO of Al Roker Entertainment, Inc. In conversation with Eun Yang, anchor of News4 Today, the #1 rated morning news show in Washington for which she won an Emmy Award.