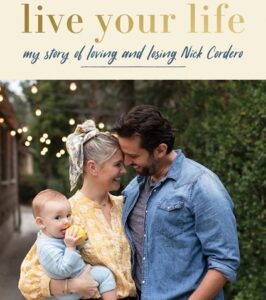 In Conversation with Zach Braff

In March 2020, Broadway star and Tony Award nominee Nick Cordero was hospitalized for what he and his wife, Amanda Kloots, believed was a severe case of pneumonia. They had every reason to believe that Cordero—young and otherwise healthy—would return home. After an eventual diagnosis of COVID-19 that led to him being placed on a ventilator, Kloots began documenting their journey on social media. Her updates captivated millions, inspiring people around the globe to dance each day to Cordero’s song “Live Your Life.” When he passed away after 94 days in the ICU, the world grieved for Kloots, their infant son, Elvis, and the future COVID-19 had stolen from them.

In Live Your Life, Kloots, a host for CBS’s “The Talk,” celebrity fitness trainer, and former Broadway dancer, tells the story of her beautiful relationship with Cordero and his dramatic fight for survival. Written with her sister Anna Kloots, Live Your Life is a poignant and uplifting reflection on love, hope, motherhood, and the transformational power of music and community to endure even the most painful circumstances—and a reminder that, sometimes, celebrating life today is the only path through tomorrow’s darkness. Kloots will be in conversation with Zach Braff, an actor, director, producer, screenwriter, and podcast host who starred in the musical adaptation of “Bullets Over Broadway” with Cordero.