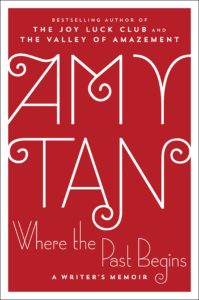 In Conversation with Deborah Tannen

The bestselling author of The Joy Luck Club and The Valley of Amazement explores her life as a writer, her childhood, and the symbiotic relationship between fiction and emotional memory in her new memoir, Where the Past Begins.

By delving into vivid recollections of her traumatic childhood, confessions of self-doubt in her journals, and heartbreaking letters to and from her mother, Tan gives evidence to all that made it both unlikely and inevitable that she would become a writer. Through storytelling, she shows how a fluid, fictional state of mind unleashed near-forgotten memories that became the emotional nucleus of her novels.

Tan explores truths uncovered by family memorabilia and, for the first time publicly, writes about her complex relationship with her father, who died when she was fifteen. With candor and humor, Where the Past Begins takes readers into the idiosyncratic workings of Tan’s mind as a writer, a journey that explores memory, imagination and truth, with fiction serving as her guide.

Tan is the author of eight books, and is also a co-producer and co-screenwriter for the film version of The Joy Luck Club. In conversation with Deborah Tannen, a professor of linguistics at Georgetown University and the author of the now-classic You Just Don’t Understand; The Argument Culture; You’re Wearing That?; and You’re the Only One I Can Tell.

Sixth & I and Politics & Prose present this program in partnership with The Alan Cheuse International Writers Center at George Mason University. Named in honor of the late American writer and cultural commentator—known as National Public Radio’s “voice of books”—who taught at GMU for almost thirty years, and dear friend of Amy Tan’s, the Cheuse Center celebrates the art of creative writing as a means of international dialogue, education, and understanding. Book signing to follow.