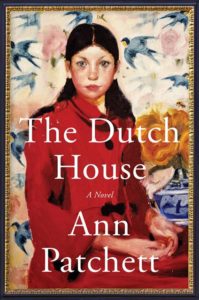 In The Dutch House, Patchett’s first novel since her #1 New York Times bestseller Commonwealth, she once again pushes against conventional notions of family to explore the intertwined lives of two siblings.

Maeve and Danny Conroy grow up in the Dutch House, a mansion on the outskirts of Philadelphia, with their real estate mogul father, Cyril. Their mother, a devout Catholic, left home to do charitable work among the poor in India, seemingly unaware of the price her abandonment would exact on her children. A decade later, Cyril marries Andrea, who seems interested only in her husband’s wealth.

When Cyril dies unexpectedly, Andrea expels Maeve and Danny from the Dutch House. In the ensuing years, they channel their bitterness in different ways, while still clinging to each other with intense loyalty. When their “us against the world” equilibrium is upset by a surprise that rekindles the most repressed loss of their childhood, everything they have come to believe about themselves and each other is tested.

Patchett is the author of seven novels and three books of nonfiction. Named one of the 100 most influential people in the world by Time magazine, Patchett is the co-owner of Parnassus Books in Nashville. Book signing to follow.