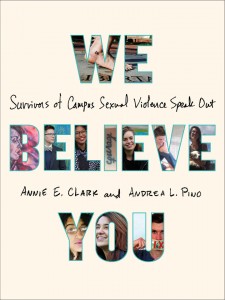 In Conversation with Senator Kirsten Gillibrand

Annie Clark and Andrea Pino are activists at the forefront of the movement to end the epidemic of sexual assault on college campuses. More than 20% of women and 5% of men are assaulted during their college careers. Student activists are just starting to expose the pervasive cover-up lead by colleges and campus institutions to keep survivors quiet.

In We Believe You: Survivors of Campus Sexual Violence Speak Out, Clark and Pino share the details of their own experiences of sexual violence, as well as give a platform to a diverse group of fellow survivors.

We Believe You elevates the stories of more than thirty students from every kind of college and university beyond the headlines to present experiences of trauma, healing, and everyday activism, representing a diversity of races, economic and family backgrounds, gender identities, immigration statuses, interests, capacities, and loves.

For Clark and Pino, the epidemic of sexual violence on college campuses might have stayed largely hidden and unaddressed. In 2013, they filed a Title IX complaint against the University of North Carolina at Chapel Hill for mishandling their sexual assault cases; within six weeks the U.S. government was investigating UNC. They have since co-founded End Rape on Campus and have helped survivors file a portion of Title IX complaints against more than 200 colleges and counting. They are prominently featured in the documentary “The Hunting Ground.”

In conversation with Senator Kirsten Gillibrand of New York. Book signing to follow.