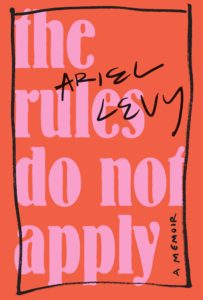 In Conversation with Jia Tolentino

“Ariel Levy is a writer of uncompromising honesty, remarkable clarity and surprising humor, gathered from the wreckage of tragedy. Her account of life doing its darnedest to topple her, and her refusal to be knocked down, will leave you shaken and inspired.”—Lena Dunham

When thirty-eight-year-old New Yorker staff writer Ariel Levy left for a reporting trip to Mongolia in 2012, she was pregnant, married, financially secure, and successful on her own terms. A month later, none of that was true.

Expanding on her award-winning essay “Thanksgiving in Mongolia,” which appeared in the 2014 “Best American Essays” anthology, Levy’s new memoir, The Rules Do Not Apply, chronicles the story of how she built an unconventional life and then watched it fall apart with astonishing speed.

Like much of her generation, Levy was raised to resist conventional rules – about work, love, and womanhood. “I wanted what we all want: everything,” Levy writes. She chronicles the adventure and heartbreak of being “a woman who is free to do whatever she chooses,” and the process of reinventing oneself in the wake of incredible loss.

In her two-decade-long career as a journalist, Levy has produced a diverse body of work, including profiles of Silvio Berlusconi, Marc Jacobs, and Cindy McCain. Her article examining Edith Windsor, the plaintiff in the Supreme Court case that brought down the Defense of Marriage Act, was nominated for a GLAAD Media Award.

Levy, a former contributing editor for New York magazine, is the author of Female Chauvinist Pigs, which critiques the rise of raunch culture and female-imposed objectification. She was named one of the “Forty Under 40” most influential out individuals by The Advocate. In conversation with Jia Tolentino, a contributing writer for newyorker.com, formerly the deputy editor at Jezebel, and a contributing editor at the Hairpin. Book signing to follow.