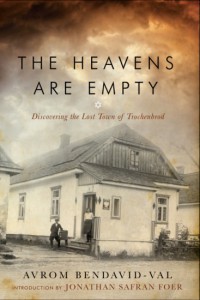 The Heavens are Empty: Discovering the Lost Town of Trochenbrod

In the 19th century, most of the five million Jews in the Pale of Settlement lived in shtetls. Brimming with life and tradition, family and faith, these shtetls existed in the shadow of their town’s oppressive anti-Jewish laws. Not Trochenbrod. Trochenbrod was the only freestanding, fully realized Jewish town in history outside the biblical Land of Israel. It began with a few settlers searching for freedom from the Russian Czars’ oppressive policies, but over the next 130 years Trochenbrod grew from a little row of houses in a clearing in the forest to a bustling regional market, manufacturing, and service town of over 5,000 Jews.

In 1942, Trochenbrod vanished. Her people were slaughtered, her homes and factories were razed to the ground. Yet the Nazis could not destroy the spirit of Trochenbrod. Bendavid-Val, himself a descendant of Trochenbrod, preserves the memory of Trochenbrod from the memories and stories of those who survived and the few Ukrainian and Polish people alive today who remember visiting this magical place in their childhoods.