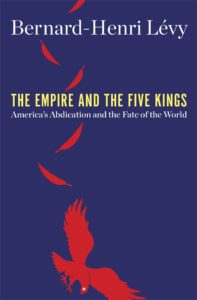 In Conversation with Robert Kagan

The United States was once the hope of the world, a beacon of freedom and the defender of liberal democracy. Nations and peoples on all continents looked to America to stand up for the values that created the Western world, and to oppose autocracy and repression. Even when America did not live up to its ideals, it still recognized their importance, at home and abroad.

But as Bernard-Henri Lévy—one of the West’s leading intellectuals—asserts in The Empire and the Five Kings: America’s Abdication and the Fate of the World, America is retreating from its traditional leadership role as Russia, China, Turkey, Iran, and Sunni radical Islamism are taking steps to assert power and influence and undermine the liberal values that have been a hallmark of Western civilization.

The Empire and the Five Kings draws upon lessons from history and human culture to reveal the stakes facing the West as America steps back from its leadership role, a process that Lévy asserts did not begin with Donald Trump’s presidency and is not likely to end with him. The crisis is one whose roots can be found as far back as antiquity and whose resolution will require the West to find a new way forward if its principles and values are to survive.

Lévy is a philosopher, activist, filmmaker and author of over thirty books including The Genius of Judaism, American Vertigo, Barbarism with a Human Face, and Who Killed Daniel Pearl? In conversation with Robert Kagan, a senior fellow with the Foreign Policy program at Brookings. He served in the State Department from 1984 – 1988 as a member of the policy planning staff, as principal speechwriter for Secretary of State George P. Shultz, and as deputy for policy in the Bureau of Inter-American Affairs. He is the author most recently of The Jungle Grows Back. Book signing to follow.