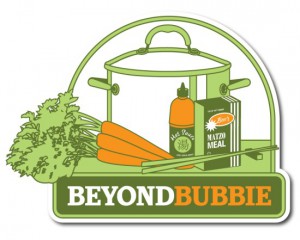 For women in their 20s and 30s.
In connection with the launch of Reboot’s beyondbubbie.com—an interactive community cookbook—Sixth & I’s Executive Director, Esther Safran Foer, and Suzanne Stutman, a practicing psychotherapist and mom to our very own Rabbi Shira, share stories about food and family, being career-minded bubbes, the evolution of what it means to be a “bubbe,” and what they wish they’d known when they were younger.

We’ll also break out into small groups to continue the conversation about all things bubbe—her impact, her inspiration, and her secret recipe for brisket, ruggelach, kugel, (insert your bubbe’s famous dish). We’ll have tastes of something evocative of bubbe’s cooking to sample.

Prior to her work at Sixth & I, Foer, grandmother of five, ran her own public relations firm. She was involved in politics as a state press secretary and a state director for a major presidential campaign. In 2008, she was included in the Forward 50, a group of Jewish leaders making the greatest impact today.

A grandmother of three, Stutman works with individuals and couples and conducts group psychotherapy in DC. Widely published, she is the co-author of Creative Anger: Putting That Powerful Emotion to Good Use and Torah with Love: Strengthening Jewish Values within the Family.