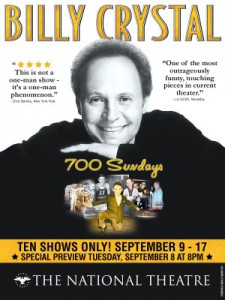 700 SUNDAYS, an autobiographical journey, is an original two-act play in which Billy Crystal plays numerous characters that have influenced who he is today. It deals with his youth, growing up in the jazz world of Manhattan, his teenage years, and finally adulthood. It is about family and fate. It is hilarious, personal, and touching as he takes us through moments of love, laughter and loss.

Hailed as a triumph by everyone from The New York Times to Sports Illustrated. The production is the crowning achievement of an amazing career. A poignant, hilarious, and personal portrayal of his youth, Crystal’s play broke Broadway box office records and failed to leave a dry eye in the house. Crystal bills his show as “not a history of my career, [but] about periods of my life and people in my life that helped make me a man.”

Sixth & I is co-presenting the first two nights of the show – September 9th and 10th – and is offering specially discounted tickets to Sixth & I email subscribers.