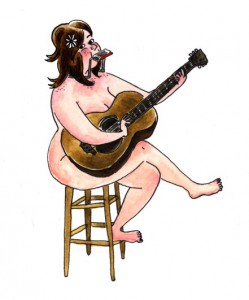 Body of Work: A Woman’s Role in Comics

Vanessa Davis is a young, Jewish cartoonist who navigates both the big and small experiences in her life through autobiographical comics. From memories of fat camp to recalling a decade of jobs gone awry, Davis’s comics represent her side of things, but can’t help but also reflect and elicit society’s opinions. In her stories, Davis offers a naked view of her life. Come explore the creative process with an interactive discussion and workshop on the portrayal of women and their bodies in comics.

Davis draws a monthly column for Tabletand authored Spaniel Rage, an illustrated memoir. Her comics have also appeared in The Best American Comics 2007, Kramers Ergot, and The New York Times.

For women in their 20s and 30s. And for the record, we love all bubbes everywhere.

This event is presented in partnership with Nextbook Inc., as part of Jewish Body Week – a series of events in New York City and elsewhere exploring the subjects raised in Melvin Konner’s 2009 book, The Jewish Body.