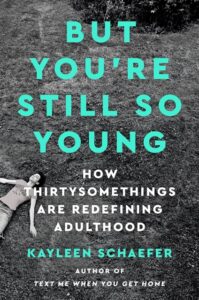 But You’re Still So Young: How Thirtysomethings Are Redefining Adulthood

Sociologists have long identified the five markers of adulthood as: finishing school, leaving home, marriage, gaining financial independence, and having kids. But repeated economic upheaval, rising debt, decreasing marriage rates, fertility treatments, and a more open-minded society have led to a shifting timeline where Americans are taking major life steps later. So why are we still measuring “adulthood” by fifty-year-old metrics that often lead to feelings of frustration, failure, and alienation?

But You’re Still So Young highlights people from various backgrounds who envisioned their thirties differently than how they are actually living them. The book illustrates how not being able to do everything by a certain age isn’t a sign of a life gone wrong—being open to going sideways or upside down means you’ve found meaning and value in different ways of living.

At this 1-hour book club, you’ll hear from author Kayleen Schaefer and have the chance to ask her questions, and spend time in breakout groups to reflect on the book and how it relates to your own experiences. We encourage you to order the book from Politics and Prose Bookstore.

Schaefer is a journalist whose work has appeared in The New York Times, Vanity Fair, The New Yorker, and Vogue, among others. She’s also the author of Text Me When You Get Home: The Evolution and Triumph of Modern Female Friendship.