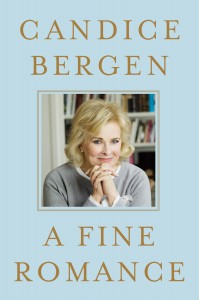 In Conversation with Madhulika Sikka

In A Fine Romance, Candice Bergen shares with humor, honesty, and wisdom the big events of her life: her marriage to a famous French director, the birth of her daughter, Murphy Brown, widowhood, falling in love again, and watching her daughter blossom.

The memoir begins with Bergen’s first husband, director Louis Malle, whose appetite for life broadened her horizons and whose occasional darkness never diminished their love for each other. But her real romance begins when she discovers an overpowering love for her daughter Chloe after years of ambivalence about motherhood. As Chloe grows up, Bergen finds her comic genius in Murphy Brown, and makes unwanted headlines when Dan Quayle pulls her into the 1992 presidential campaign.

Fifteen years into their marriage, Malle is diagnosed with cancer and passes away. After years of widowhood, Bergen feels the sweet shock of finding a different kind of soulmate. She takes us through the first years of her new marriage and shares the bitter sweetness of watching Chloe leave home and flourish—and the comedy of a losing battle against wrinkles and extra pounds.

Bergen’s film credits include The Sand Pebbles, Carnal Knowledge, Starting Over, and Miss Congeniality. She won five Emmy Awards for Murphy Brown. A gifted writer, Bergen has penned numerous articles and a play, as well as her first bestselling memoir, Knock Wood. In conversation with Madhulika Sikka, the Executive Editor for NPR News. Book signing to follow.