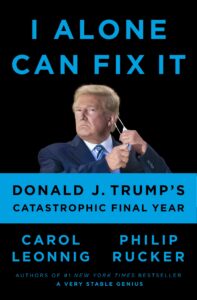 In Conversation with Nicolle Wallace

The true story of what took place in Donald Trump’s White House during a disastrous 2020 has never before been told in full. What was really going on around the president, as the government failed to contain the coronavirus and over half a million Americans perished? Who was influencing Trump after he refused to concede an election he had lost and spread misinformation about election fraud?

In I Alone Can Fix It, Pulitzer-Prize winning reporters Carol Leonnig and Philip Rucker reveal the Trump presidency’s inner workings in unprecedented detail. Focused on Trump and the key players around him—the doctors, generals, senior advisers, and Trump family members—Rucker and Leonnig provide a forensic account of the most devastating year in a presidency like no other. With unparalleled access, Rucker and Leonnig explain and expose exactly who enabled—and who foiled—Trump as he sought desperately to cling to power.