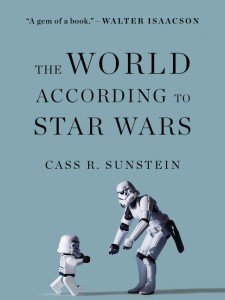 The World According to Star Wars is an original celebration of George Lucas’s masterpiece and an exploration of what we can learn from Star Wars—across history, presidential politics, law, economics, fatherhood and culture—by Sunstein, a Harvard legal scholar and former White House regulatory czar.

The Star Wars series, Sunstein argues, is all about serendipity and freedom: we explore the clouded nature of the future, the dismal failures of plans, and the inevitability, in our lives and our society, of “I am your father” moments, which cast a new light on everything that has gone before.

“Impossible to see, the future is,” says Yoda; this is the secret theme of Star Wars and the foundation of its tribute to human freedom. In The World According to Star Wars, you’ll learn: