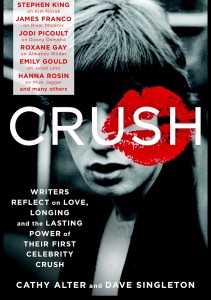 In Conversation with Michelle Brafman

Even if you’re James Franco, Jodi Picoult, Stephen King, Roxane Gay, or Andrew McCarthy, you never forget your first crush. CRUSH: Writers Reflect on Love, Longing and the Lasting Power of Their First Celebrity Crush is a star-studded collection of 38 original essays edited by memoirists Cathy Alter and Dave Singleton.

Contributors – including Alter and Singleton – share tales of the first time they swooned over a rock star, imagined their wedding to a television character, or, miraculously, met their idol. The crushes they reveal are eclectic, poignant, and sometimes surprising, from Tatum O’Neal and River Phoenix to Speed Racer.

In conversation with contributor Michelle Brafman, Alter and Singleton revisit the feelings of falling for the unattainable, and other local contributors share the who and why behind their first celebrity crush.

Alter’s writing has appeared in The Washington Post, Atlantic.com, O, The Oprah Magazine, and McSweeney’s, among others. She is the author of Virgin Territory: Stories from the Road to Womanhood and Up for Renewal: What Magazines Taught Me About Love, Sex, and Starting Over. She is a faculty member in the writing program at Johns Hopkins University.

Singleton is an award-winning writer/producer, author of The Mandates and Behind Every Great Woman, and multimedia communications expert. His work has appeared in The Washington Post, Chicago Tribune, PBS’s Next Avenue, AARP Media, Yahoo, the BBC,  Harper’s Bazaar, and OUT, among others. He teaches at The Writing Center in DC. Book signing to follow.