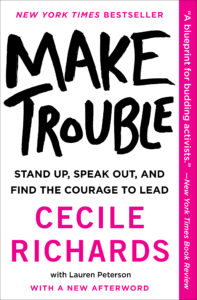 In Conversation with Rep. Lauren Underwood

On the occasion of the paperback release of the New York Times bestseller Make Trouble—and on the heels of an historic number of women elected to Congress—the former president of Planned Parenthood speaks with Congresswoman Lauren Underwood about standing up, speaking out, and finding the courage to lead.

From the time Richards was a child, she had a front-row seat to observe the rise of women in American politics. She watched her mother, Ann, transform from a housewife to the straight-talking governor of Texas. During a lifetime spent fighting for social justice and women’s rights, Richards witnessed the pitfalls of public life that are unique to women—misogyny, sexism, fake news, and the threat of violence confronting those who challenge authority. Her advice, lessons learned, and inspiration for the next generation of women leaders are captured in Make Trouble, a story about learning to lead and make change.

Rep. Lauren Underwood serves Illinois’ 14th Congressional District and was sworn into the 116th U.S. Congress on January 3, 2019. She is the first woman, the first person of color, and the first millennial to represent her community in Congress, as well as the youngest African American woman to serve in the U.S. House of Representatives.