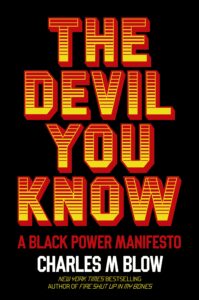 In Conversation with Laura Barrón-López

In The Devil You Know: A Black Power Manifesto, Blow—an Op-Ed columnist for the New York Times­—delivers a resounding call to action for Black Americans to amass political power and fight white supremacy.

Blow never wanted to write a “race book.” But as violence against Black people—both physical and psychological—seemed only to increase in recent years, culminating in the historic pandemic and protests of the summer of 2020, he felt compelled to write a new story for Black Americans. He envisioned a succinct, counterintuitive, and impassioned corrective to the myths that have for too long governed our thinking about race and geography in America. Drawing on both political observations and personal experience as a Black son of the South, Blow presents a road map by which Black people can generate an unprecedented shift in power and finally achieve equality and true and lasting freedom, on their own terms.

Blow is an acclaimed journalist who appears frequently on CNN. He is the author of the New York Times bestselling memoir Fire Shut Up in My Bones. In conversation with Laura Barrón-López, a White House correspondent for POLITICO and a political analyst for CNN. She covered the 2020 presidential race and also helped lead coverage of the pandemic’s impact on different racial and ethnic groups.