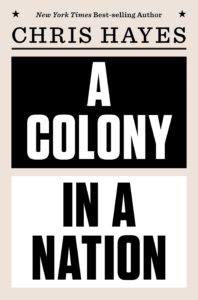 In Conversation with Jamelle Bouie

In his new book A Colony in a Nation, the Emmy Award-winning host of “All In” on MSNBC upends our national conversation on policing and democracy with a wide-ranging analysis of historical, social, and political factors, from wealth and unemployment to incarceration and school segregation.

Hayes contends our country has fractured in two: a Colony and a Nation. In the Nation, we venerate the law. In the Colony, we obsess over order and fear trumps civil rights. A Colony in a Nation explains how in a country founded on justice, racial inequality has barely improved since 1968.

A Colony in a Nation examines the surge in crime that began in the 1960s and peaked in the 1990s, and the unprecedented decline that followed. Drawing on close-hand reporting at flashpoints of racial conflict, as well as deeply personal experiences with policing, Hayes explores cultural touchstones, from the influential “broken windows” theory to the “squeegee men” of late-1980s Manhattan, to show how fear causes us to make dangerous and unfortunate choices, both in our society and at the personal level.

Hayes is also the Editor-At-Large of “The Nation,” and the author of the New York Times best-seller Twilight of the Elites. In conversation with Jamelle Bouie, the Chief Political Correspondent for Slate and a political analyst at CBS News. Book signing to follow.