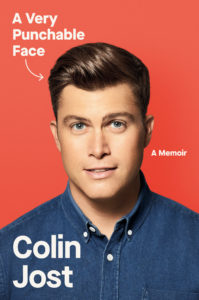 In Conversation with Andrew Yang

If there’s one trait that makes someone well suited to comedy, it’s being able to take a punch—metaphorically and, occasionally, physically. In his debut memoir A Very Punchable Face, stand-up comedian, “Saturday Night Live” head writer, and Weekend Update co-anchor Colin Jost proves that he knows how to take a beating.

In the book, Colin—a witty observer of human behavior—writes with razor-sharp comic timing and self-aware vulnerability about everything from the coming-of-age stories that shaped his youth in Staten Island, to being a student at Harvard at the dawn of Facebook, to behind the scenes at SNL where he’s written some of the most memorable sketches and characters of the past fifteen years, all while being humiliated along the way. For every accomplishment (hosting the Emmys), there is a setback (hosting the Emmys). And for every absurd moment (watching paramedics give CPR to a raccoon), there is an honest, emotional one (recounting his mother’s experience as the chief medical officer of the FDNY on the scene of the Twin Towers’ collapse on 9/11).

Written with candor and a healthy dose of self-deprecating humor, A Very Punchable Face reveals the brilliant mind behind some of the dumbest sketches on television, and lays bare the heart and humor of a hardworking guy—with a face you can’t help but want to punch. In conversation with Andrew Yang, an entrepreneur, founder of the non-profit Humanity Forward, and former 2020 Democratic presidential candidate.