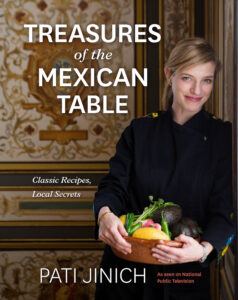 Treasures of the Mexican Table

From James Beard Award-winning Mexican chef and Emmy Award-nominated TV host Pati Jinich comes Treasures of the Mexican Table: Classic Recipes, Local Secrets, a culmination of Jinich’s decades-long quest to discover the best of her home country’s culinary treasures. In this virtual cooking class, Jinich will teach you how to make guajillo mushroom soup and chunky chile mangoes, both featured in the book. Before the class, you’ll receive a list of ingredients and the recipes, so you can cook along in real time.

The more than 150 recipes in Treasures of the Mexican Table are collected from Jinich’s travels deep into her home country, from a Mayan hut in the Yucatán jungle to the bustling Central de Abastos market in Oaxaca. Recipes from birria to salsa macha to carne asada are accompanied by stories told in her signature warm, relatable style and, together, paint a vivid picture of the richness of Mexico’s cuisine.

Born and raised in Mexico City and now residing in Chevy Chase, Maryland, Jinich is the host of the three-time James Beard Award-winning and three-time Emmy nominated television series “Pati’s Mexican Table.” She is the resident chef of the Mexican Cultural Institute and has been named one of the “100 Greatest Cooks of All-Time” by Epicurious and Bon Appétit. Jinich is also the author of Mexican Today and Pati’s Mexican Table.