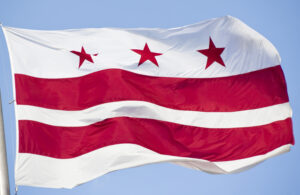 Could DC be the 51st State?

Washington, DC’s 700,000 residents don’t get to elect a voting representative to Congress. In a year marked by the coronavirus pandemic, protests near the White House against police brutality, and the insurrection at the Capitol, DC’s decades-long push for local control has heated up. In early 2021, a bill to make the District of Columbia America’s 51st state was reintroduced in the Senate after passing the House for the first time in history last year. With President Biden – a statehood supporter – in the White House and Democrats in control of both chambers of Congress, is DC on its way to becoming the 51st state?

Mikaela Lefrak, WAMU reporter and host of “51st”, a podcast about Washingtonians’ fight for representation, will moderate a conversation about how the statehood movement intersects with the civil rights movement; why DC statehood could and should matter to people outside the District; and whether a statehood bill actually has a chance at success. Panelists include George Derek Musgrove, a history professor and co-author of Chocolate City: A History of Race and Democracy in the Nation’s Capital, Robinson Woodward-Burns, an assistant professor of political science at Howard University, and Stasha Rhodes, Campaign Director for 51 for 51, a coalition of groups advocating for DC statehood.