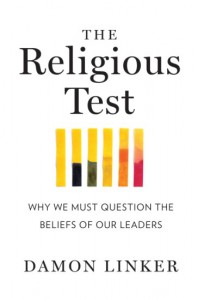 The Religious Test: Why We Must Question the Beliefs of Our Leaders

The Constitution states that “no religious test” may keep a candidate from aspiring to political office. Yet, since John F. Kennedy used the phrase to deflect concerns about his Catholicism, the public has largely avoided probing candidates’ religious beliefs. Is it true that a candidate’s religious convictions should be off-limits to public scrutiny?

Damon Linker doesn’t think so, and in this book he outlines the various elements of religious belief that are incompatible with high office in a democracy. He explains the complicated interrelations between churches and states, consistently applying a political litmus test to a range of theological views. Linker urges both believers and atheists to behave better in the public sphere, and he offers a carefully charted road map for doing so.

Linker is a contributing editor at The New Republic and a Senior Writing Fellow in the Center for Critical Writing at the University of Pennsylvania. He will be interviewed by Richard Just, Executive Editor of The New Republic.