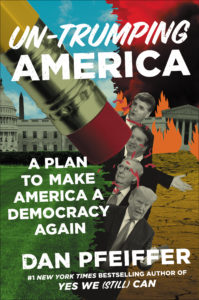 In Conversation with Jennifer Palmieri

President Obama’s former communications director, the co-host of “Pod Save America,” and the #1 New York Times bestselling author of Yes We (Still) Can offers a political playbook for fixing our democracy with Un-Trumping America: A Plan to Make America a Democracy Again.

Un-Trumping America centers on three critical areas: President Trump is not an aberration, but rather the logical extension of the modern Republican Party; how Democrats can prevail in 2020; and how to prevent another Trump-like leader with a plan to fix democracy.

Pfeiffer asserts that President Trump’s strategy—engineered by Mitch McConnell, funded by big business, and fueled by conservative media—has manipulated American politics to drown out the voices of the people in favor of the powerful. He goes on to argue that without a response that recognizes who the Republicans are and what they have done, American democracy as we know it won’t survive this polarized moment, and a shrinking, mostly white minority will govern the country for decades.

Pfeiffer urges Democrats to embrace bold solutions, from fixing the courts to abolishing the Electoral College to eliminating the filibuster in order to make America more democratic. In conversation with Jennifer Palmieri, a former communications director for the Obama administration and Hillary Clinton campaign, and the author of the #1 New York Times bestseller Dear Madam President. Book signing to follow.