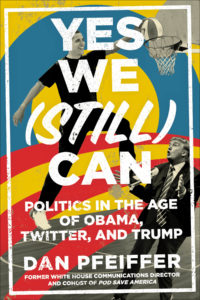 In Conversation with Alyssa Mastromonaco

From President Obama’s former communications director, one of his longest serving advisors, and current co-host of “Pod Save America” comes Yes We (Still) Can, a colorful account of how politics, the media, and the Internet changed during the Obama presidency and where Democrats can go from here.

Using never-before-heard stories and behind-the-scenes anecdotes, Pfeiffer presents an irreverent and unfiltered take on the unprecedented politics of our time. He recounts how President Obama navigated the political forces that led to President Trump’s win, explains why many got 2016 wrong, and offers a path forward for everyone who is marching, calling, and hoping for a better future for the country.

In conversation with Alyssa Mastromonaco, former deputy chief of staff to President Obama and author of Who Thought This Was a Good Idea?: And Other Questions You Should Have Answers to When You Work in the White House. Book signing to follow.