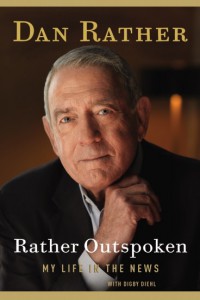 From Dan Rather, one of the most influential and award-winning journalists of our time, comes Rather Outspoken: My Life in the News, the story of his event-filled career—and his insight on the future of America’s news media.

In this candid autobiography, Rather covers all the important moments of his career, including a frank accounting of his dismissal from CBS News,where he had worked for 44 years, one of the longest tenures of any evening news anchor.Rather also shares new insights into the Abu Ghraib scandal, the George W. Bush Air National Guard controversy, JFK’s assassination, and his personal politics, as well as inside stories about the top personalities he has interviewed or worked with over the course of his storied career.

Rather will be in conversation with Tom Bettag. Bettag, a broadcast journalist for 45 years, has been executive producer of the CBS Evening News with Dan Rather, ABC News Nightline with Ted Koppel, and CNN’s State of the Union with Candy Crowley. He is currently a producer for NBC’s prime time magazine, Rock Center with Brian Williams.