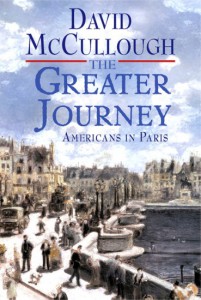 The Greater Journey is the enthralling—and until now, untold—story of American artists, writers, doctors, politicians, architects, and others of high aspiration who set off for Paris between 1830 and 1900. After risking the hazardous journey across the Atlantic, these Americans embarked on a greater journey in the City of Light.

Samuel F. B. Morse brought home his idea for the telegraph. From all he learned in Paris, Oliver Wendell Holmes exerted a lasting influence on the profession of medicine in the U.S. Writers Ralph Waldo Emerson, Nathaniel Hawthorne, Mark Twain, and painter Mary Cassatt flourished in Paris and returned to profoundly alter American history. Despite trouble learning French, spells of homesickness, and suffering cold winters by the Seine, they spent many of the happiest days of their lives in Paris.