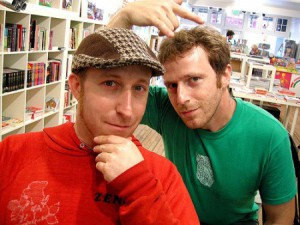 My Heart is an Idiot: FOUND Magazineâs 10th Anniversary Tour

FOUND Magazine’s 10th Anniversary Tour—with stops in 75 cities—celebrates the release of Davy Rothbart’s book of personal essays My Heart is an Idiot, his brother Peter’s new album You Are What You Dream, and a brand-new issue of FOUND.

FOUND publishes notes, photos, and other interesting items in a magazine, in books, and on its website. From love letters to homework assignments, items are contributed by people who find them in public places.

Davy will share the latest finds that have landed in the mailbox at FOUND HQ, plus tales from his new book, while Peter will dazzle with beautiful, haunting, and hilarious songs based on FOUND notes.

Davy Rothbart is the creator of FOUND, a contributor to This American Life, and author of The Lone Surfer of Montana, Kansas. Peter Rothbart is an award-winning songwriter, an editor at FOUND, and the frontman for folk/rock group The Poem Adept. Book signing to follow.