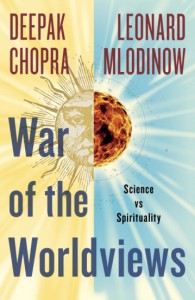 In War of the Worldviews: Science vs. Spirituality, the two bestselling authors debate the most fundamental questions of human existence.

How did the universe begin? Where did life come from? Is there design in nature?

Without defending organized religion, Chopra asserts that there is design in the universe and a deep intelligence behind the rise of life. Mlodinow, CalTech physicist and the writing collaborator of Stephen Hawking, argues for the viewpoint of science, specifically of modern quantum physics.

War of the Worldviews opens the public’s eyes to the fascinating frontier where knowledge and mystery converge and every assumption about life, God, and the universe are open to debate. Program moderated by Timothy Shriver, Chairman and CEO of the Special Olympics.