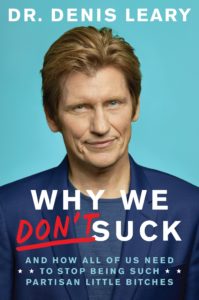 In Conversation with Jonathan Allen

Known for his role on FX’s Rescue Me, Denis Leary, the author of the New York Times bestselling Why We Suck, returns with a searing and comical look at the current political climate, skewering liberals and conservatives alike, in Why We Don’t Suck: And How All of Us Need to Stop Being Such Partisan Little Bitches.

With his signature sarcasm and common sense, Leary refutes the highly polarized approach to American politics, where you’re either one or the other, with no gray areas in between. Leading a new protest movement called “Gray Lives Matter,” he takes equal opportunity to call out the arguing we see every night on CNN and Fox. With a devoted mission to Make America Laugh Again, Leary tackles the topics we all hold close to our American hearts: Twitter, Instagram, and the seemingly endless search for fame and diet vodka.

In the book, he answers such burning questions as: when will Hillary run out of pantsuits? Why does Beyoncé think he’s Bryan Adams? And why doesn’t Leary himself follow the millennial lead and post pictures of his food on social media? (Spoiler alert: He’s too busy actually eating it.)

With a bipartisan perspective, Leary is here to remind us of what makes America great, even though we’re #7 on the list of Best Countries to Live In. Which may sound bad, but means we still make the playoffs. In conversation with Jonathan Allen, a national political reporter with NBC News. A winner of the Dirksen and Hume awards for his reporting on Congress, he was previously the Washington bureau chief for Bloomberg and the White House bureau chief for Politico.