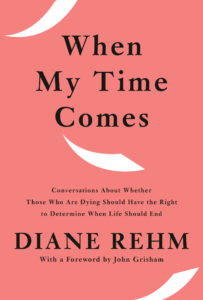 In Conversation with Kojo Nnamdi

A renowned radio host for four decades and host of the podcast “On My Mind,” Diane Rehm is a champion of the right-to-die movement. In When My Time Comes: Conversations About Whether Those Who Are Dying Should Have the Right to Determine When Life Should End, she examines the movement from human, medical, legal, and ethical perspectives.

Through interviews with terminally ill patients, physicians, ethicists, spouses, relatives, and representatives of those who vigorously oppose the movement, Rehm gives voice to a broad range of people linked to the realities of medical aid in dying. When My Time Comes presents the fervent arguments—both for and against—propelling the current debates across the nation about whether to adopt laws allowing those who are dying to put an end to their suffering. With characteristic even-handedness, Rehm shows both sides of the argument, providing the full context for this highly divisive issue.

Rehm is a recipient of a National Humanities Medal and was awarded a Personal Peabody Award for her career in public broadcasting. She’ll be in conversation with Kojo Nnamdi, the host of “The Kojo Nnamdi Show” and “The Politics Hour” on WAMU 88.5. Book signing to follow.