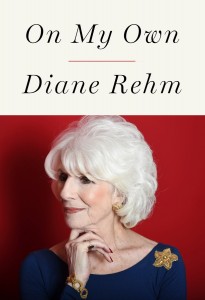 In Conversation with Mike Rosenwald

Tickets purchased for the original event date of March 2nd – postponed due to the author having the flu – will be honored at the rescheduled event. All March 2nd ticket buyers have been contacted by TicketFly, our ticketing provider, with instructions for how to request a refund before Friday, March 11 at 5:00 pm.

The host of the national program The Diane Rehm Show on WAMU has interviewed presidents, supreme court justices, heads of state, journalists, artists, politicians, and celebrities for over 35 years. Despite never having gone to college, she has created one of the most admired shows on NPR and been awarded both a Peabody and a National Humanities Medal. Now, after the death of her husband John, she has added a new chapter to her legacy: as an activist and supporter of the movement for the Right to Die.

Her new memoir, On My Own, is a deeply personal account of how one says goodbye to a spouse of 54 years and of the life that remains, and the new life that is possible after that partner is gone.  Suffering from Parkinson’s disease, she writes of her anger that John wasn’t “allowed to go in a more peaceful manner,” on his own timeline, with his loved ones at his side.

Right to Die laws have been passed in Oregon, Washington, and Vermont; the governor of California signed a physician assisted-suicide bill in October 2015. The movement for death with dignity is growing, and Diane has joined the crusade. In conversation with Mike Rosenwald, an enterprise reporter at The Washington Post. Book signing to follow.