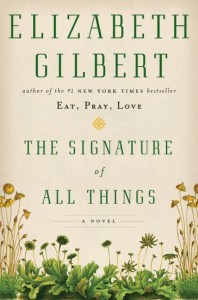 Elizabeth Gilbert’s first novel in 12 years, The Signature of All Things, is a story of botany, exploration and desire, spanning across much of the 19th century. The novel follows the fortunes of the brilliant Alma Whittaker (daughter of a charismatic botanical explorer) as she comes into her own within the world of plants and science. As Alma’s careful studies of moss take her deeper into the mysteries of evolution, the man she loves, Ambrose, draws her in the opposite direction—into the realm of the spiritual, the divine, and the magical.

What unites this couple is a shared passion for knowing—a need to understand the workings of this world, and the mechanism behind of all life. The Signature of All Things is a big novel about a big century, written in the questing spirit of that singular time. Alma is a witness to history, as well as maker of history herself. She stands on the cusp of the modern, with one foot still in the Enlightened Age, determined to satisfy her most powerful urges toward both love and knowledge.

Gilbert is the author of five books of fiction and nonfiction, including the #1 New York Times bestselling Eat, Pray, Love. In 2008, Time magazine named her one of the most influential people in the world.