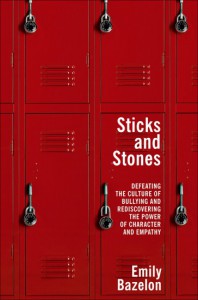 In Conversation with Russell Shaw, Head of School of Georgetown Day School

Being a teenager has never been easy, but in recent years, it has become exponentially more challenging. With the rise of the Internet and social media, bullying has taken on new, complex, and insidious forms. Recent tragic and often sensationalized stories have made the issue of bullying one of national concern.

In Sticks and Stones: Defeating the Culture of Bullying and Rediscovering the Power of Character and Empathy, Bazelon explores the shifting landscape of teenage cruelty and harassment and its sometimes devastating consequences. She tells the stories of three young people who found themselves caught in the thick of bullying and how their predicaments escalated into community-wide wars. She also visits schools and communities whose innovative anti-bullying efforts could very well offer a road map out of this mess.

Bazelon is a senior editor at Slate, a contributing writer at The New York Times Magazine, a frequent guest on Comedy Central’s The Colbert Report, and the Truman Capote Fellow at Yale Law School.

She will be in conversation with Russell Shaw, Head of School of Georgetown Day School.