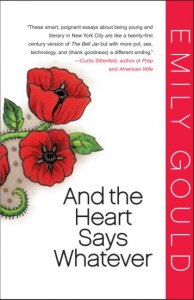 Outspoken, fiercely intelligent, unapologetically sexual, and a lightning rod for controversy, 28-year-old Emily Gould has been called by some, “the voice of her generation.” From the downtown offices of Gawker.com to the cover of The New York Times Magazine, Gould has taken on some of the most vexed issues “her generation” has to face as well as the age-old intricacies of the human heart.

In And the Heart Says Whatever, Gould details the mistakes she’s made, in public and in private. For everyone who has ever had a job they wish they didn’t, wanted to pack up and move to the city without a plan, ended a relationship, regretted a decision, or told a secret to the wrong person, these stories are familiar and they may remind you of the best stories of your own life.

Gould will be interviewed by Hanna Rosin, Founding Editor of DoubleX and Contributing Editor to the Atlantic.