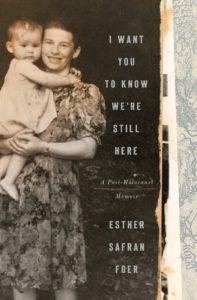 In Conversation with Franklin Foer

This event will be live-streamed and free of charge. You can access the program tonight at Facebook.com/sixthandi.
Please contact
Carolyn McCalley with any questions.

Celebrate the debut memoir by our former CEO!

Esther Safran Foer grew up in a home where the past was too terrible to speak of. Born in Poland after World War II, her mother and father were each the sole survivors of their families. The Holocaust loomed in the backdrop of her daily life, something felt but never discussed. The result was a childhood marked by painful silences and continued tragedy.

Even as she built a successful life, Esther always felt herself searching. In her forties, she learned that her father had a previous wife and daughter, both murdered in the Holocaust; this marked the beginning of the search that would define her next 20 years.

When Esther’s son, Jonathan, visited the shtetl Trochenbrod in Ukraine to look for the family who hid her father during the war, he didn’t find anything. Lacking facts, he wrote the novel Everything is Illuminated, the success of which awakened worldwide interest in Trochenbrod and led to new clues for Esther.

In I Want You to Know We’re Still Here, Esther recounts her journey to find the missing pieces from her past and let her ancestors know that, despite everything, their family was still here. Esther will be in conversation with her eldest son, the journalist Franklin Foer.

A special thank you to our event underwriters, without whom this evening would not be possible: