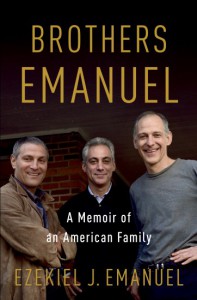 In conversation with Corby Kummer

The mayor of Chicago, a Hollywood super-agent, and a leading bioethicist and oncologist also happen to be brothers born into a family of modest means. So, what did Ezekiel, Rahm, and Ari’s mom put in the cereal?

In Brothers Emanuel: A Memoir of an American Family, eldest brother “Zeke” explains the path Ari took from an entrepreneurial kid who suffered from dyslexia to the real-life model for the character of Ari Gold on Entourage; the path (quietest child!) Rahm took from underachieving student and accomplished ballet dancer to American politics; and the path Zeke himself took from geeky high school debater to bioethicist and special advisor for health policy in the Obama administration.

Zeke credits the bond of Emanuel brotherhood as a major influence on the men they grew up to be. Brothers Emanuel is the narrative of how one American family succeeded in raising three extraordinary children.
Zeke will be in conversation with Corby Kummer, a senior editor of The Atlantic.