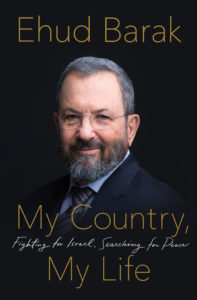 In the summer of 2000, the most decorated soldier in Israel’s history set himself a challenge as daunting as any he had faced on the battlefield: to secure a final peace with the Palestinians. Barak would propose two states for two peoples, with a shared capital in Jerusalem.

My Country, My Life: Fighting for Israel, Searching for Peace takes us inside that critical moment, and the lifetime that led up to it. The soldier-statesman reflects on his country’s first seven decades; of its major successes, but also its setbacks and misjudgments. He offers candid assessments of his fellow Israeli politicians, of the American administrations with which he worked, and of himself.

Drawing on his experiences commanding Israel’s special forces and serving as prime minister, he sounds a warning: Israel is at a crossroads, threatened by events beyond its borders and by divisions within. Barak details why the two-state solution is more urgent than ever, not just for the Palestinians, but for the existential interests of Israel itself. In conversation with Jeffrey Goldberg, the editor in chief of The Atlantic.