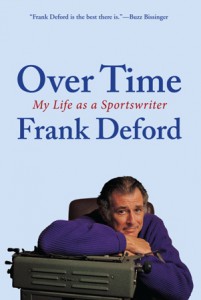 Over Time: My Life as a Sportswriter is as wide-ranging as Deford’s remarkable career. He joined Sports Illustrated in 1962, and made his fame with profiles of two teenage up-and-comers: Bill Bradley and Bobby Orr. Since then, Deford has been America’s leading chronicler of sports’ heroes and characters. He’s been named National Sportswriter of the Year six times and has written nearly 1,500 essays for NPR.

In Over Time, Deford traces the entire arc of American sportswriting, from the lurid early days of the Police Gazette to ESPN. He reveals the expense-account shenanigans and antiquated racial and sexual mores, but also the professional camaraderie and friendship writers share with players and coaches.

Deford is a senior contributing editor at Sports Illustrated, a weekly commentator on NPR’s Morning Edition, and a correspondent on HBO’s Real Sports with Bryant Gumbel. He’s written 18 books and is winner of a Peabody and an Emmy award.

Inskeep is host of NPR’s Morning Edition. His most recent book is Instant City: Life and Death in Karachi. Book signing to follow.