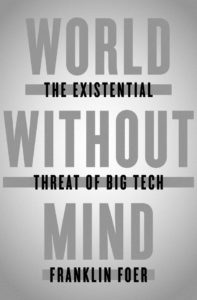 Over the past few decades there has been a revolution in terms of who controls knowledge and information. We shop with Amazon; socialize on Facebook; turn to Apple for entertainment; and rely on Google for information. This rapid change has greatly impacted the way we think.

In World Without Mind, journalist Franklin Foer reveals the existential threat posed by big tech. Tracing the intellectual history of computer science—from Descartes and the enlightenment to Stuart Brand and the hippie origins of today’s Silicon Valley—Foer exposes the dark underpinnings of our most idealistic dreams for technology.

The corporate ambitions of Google, Facebook, Apple, and Amazon, he argues, are trampling longstanding liberal values, especially intellectual property and privacy. As these firms sell their efficiency and purport to make the world a better place, Foer argues that they have produced an unstable and narrow culture of misinformation, and put us on a path to a world without private contemplation, autonomous thought, or solitary introspection—a world without mind. In the book, Foer offers a toolkit to reclaim authority over how we intellectually engage with the world.

A national correspondent for The Atlantic, Foer is the former editor-in-chief of The New Republic and the author of the bestseller, How Soccer Explains the World. In conversation with Hanna Rosin, co-host of NPR’s Invisibilia. Book signing to follow.