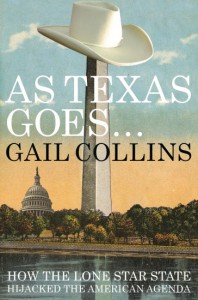 In As Texas Goes…How the Lone Star State Hijacked the American Agenda,Collins declares the “what happens in Texas doesn’t stay in Texas anymore.”

Not until she visited Texas, the state of big oil and bigger ambitions, did Collins, the best-selling author and columnist for the New York Times, realize that she had missed the one place that mattered most in America’s political landscape.

Through its vigorous support of banking deregulation, lax environmental standards, and draconian tax cuts, and through its fierce championing of states rights, gun ownership, and sexual abstinence, Texas has become the bellwether of a far-reaching national movement that continues to have profound social and economic consequences for us all. According to Collins, like it or not, as Texas goes, so goes the nation. Book signing to follow.