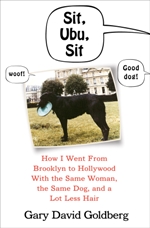 Sit, Ubu, Sit is an account of an incredibly successful—and incredibly unexpected—life in show business. It is also a heartfelt account of one man’s lifelong devotion to his wife through even the most difficult of times, including her fight against an incapacitating disease that nearly took her life. This is no backstabbing, mudslinging, tell-all; it is an inside Hollywood story with humor, heart, and an extraordinary black Labrador whose bark became a well-known prime-time television sign-off.

Best known for creating Family Ties (largely based on his own experiences with his wife, Diana, as ex-hippies raising a family in the 1970s), Goldberg produced and created television shows as well as movies, including Brooklyn Bridge (based on his own extended Jewish family from Bensonhurst, Brooklyn) and Spin City.

What shines through every page of Sit, Ubu, Sit is Goldberg’s warmth, good humor, and gratitude—for his  forty-year partnership with Diana; for the special friendship he shares with Michael J. Fox; for his enduring closeness with his childhood friends from Brooklyn; and, ultimately, for having been able to make a living doing something he loved so much.