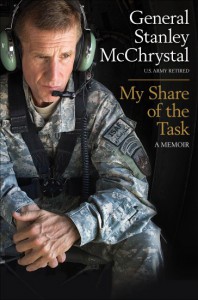 General Stanley McChrystal, commanding officer of U.S. and coalition forces in Afghanistan, a West Point graduate and a four-star general, witnessed and participated in some of our military’s most challenging struggles. In his work leading the Joint Special Operations Command he steered the collection of staggering amounts of intelligence in order to find and remove the most influential and notorious terrorists, including the leader of Al Qaeda in Iraq.

In My Share of the Task, General McChrystal frankly explores the major episodes and controversies of his eventful career. His memoir is about much more than war and peace, terrorism and counterinsurgency.

As McChrystal writes, “More by luck than design, I’d been a part of some events, organizations, and efforts that will loom large in history, and more that will not. I saw selfless commitment, petty politics, unspeakable cruelty, and quiet courage in places and quantities that I’d never have imagined. But what I will remember most are the leaders.”