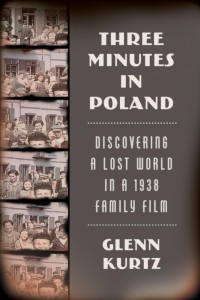 In Conversation with Leslie Swift

Traveling in Europe in August 1938, one year before the outbreak of World War II, David Kurtz, a Jewish immigrant to the U.S., captured three minutes of ordinary life in a small, predominantly Jewish town in Poland on 16 mm Kodachrome color film. Through the brutal twists of history, these few minutes of home-movie footage became the sole surviving moving images of this town. Seventy-five years later, as part of the USHMM’s permanent collection, the film serves as a memorial to an entire community—an entire culture—that was annihilated in the Holocaust.

Three Minutes in Poland, a new book by writer Glenn Kurtz, traces the author’s remarkable four-year journey to identify the people in his grandfather’s haunting images. Rarely seen archival footage will punctuate an intimate conversation between the author and USHMM Film Researcher Leslie Swift, revealing the extraordinary discoveries made when they teamed up to unlock the secrets of this home movie. Book signing to follow.