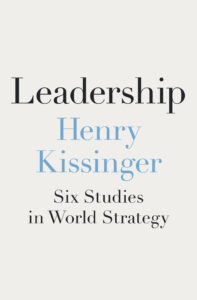 In Conversation with Andrea Mitchell

This program will now be held virtually, instead of in-person at Sixth & I. We know that this is a significant change of plans and understand that many of you were looking forward to seeing Mr. Kissinger in person—we sincerely apologize for any disappointment. Additional information has been sent to all ticket buyers, and all in-person tickets will be honored as virtual tickets. Mr. Kissinger sends his deepest apologies that he cannot appear in person but he hopes that you’ll still be interested in watching his conversation with Andrea Mitchell online. With questions, please contact us.

In Leadership: Six Studies in World Strategy, Henry Kissinger—former National Security Advisor and Secretary of State under Presidents Nixon and Ford examines six twentieth-century leaders through the distinctive strategies of statecraft and brings to life a unifying theory of leadership and diplomacy.

Kissinger writes that “Leadership is most essential during periods of transition, when values and institutions are losing their relevance, and the outlines of a worthy future are in controversy,” and each figure profiled in the book inherited a world marked by changes. After the Second World War, Konrad Adenauer brought defeated and morally bankrupt Germany back into the community of nations by what Kissinger calls “the strategy of humility.” Charles de Gaulle set France beside the victorious Allies and renewed its historic grandeur by “the strategy of will.” During the Cold War, Richard Nixon gave geostrategic advantage to the U.S. by “the strategy of equilibrium.” After twenty-five years of conflict, Anwar Sadat brought a vision of peace to the Middle East by a “strategy of transcendence.” Against the odds, Lee Kuan Yew created a powerhouse city-state, Singapore, by “the strategy of excellence.” And, though Britain was known as “the sick man of Europe” when Margaret Thatcher came to power, she renewed her country’s morale and international position by “the strategy of conviction.”

Leadership is enriched by insights and judgements that only Kissinger could make—he knew each of the subjects and participated in many of the events he describes—and concludes with his reflections on world order and the indispensability of leadership today.